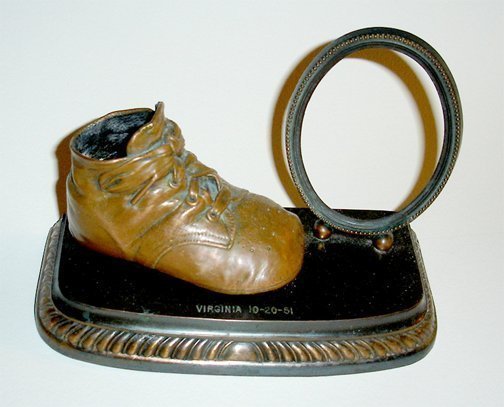 My mother had my first pair of baby shoes, and those of my 2 sisters and my brother bronzed. My siblings’ had a pair of shoes, but mine was the only “single shoe”.  I asked my mother why and she said, “you chewed the other one so badly, it could not be used.”  That was the story behind the 1-bronzed shoe.  Since my sisters’ had 2 shoes, their frame was between the shoes.

The baby shoes were always in the empty space where the bible was kept in my parents’ headboard. Religiously dusted and carefully packed through the many moves that our family made. The glass in the frames was no longer there and the pictures had been moved to a photo album in a trunk where my mother kept all the important papers. No one remembers when that happened.

Then when my older sister had her kids, my mother had their shoes bronzed. When my children were born, I kept their baby shoes in the hopes of having them bronzed when I had money. My younger sister has kept her son’s baby shoes with the same hope.

When I looked into getting my own children’s shoes bronzed, I realized what a sacrifice my mother had made to get ours done.  Her mother died when she was 5 so having a family was extremely important to her. She was a single mother when she had my older sister’s shoes bronzed. When my shoes were done, my father was a soldier in Korea. By the time my mother had my brother’s shoes done, there were 6 of us living in a 1-bedroom cold water flat/apartment in the Lower East Side of New York.

My older sister had passed away in 1982, and her daughter got her pair of shoes. My mother passed away in 1994, but my father kept all the shoes in their special place above his bed until my younger sister and I emptied his apartment in 2006 to move him to a nursing home.  One of the first things that we looked for were our shoes since they had always reminded us of the love our mother had for us and the sacrifices she made to keep her family together.

When I look at the shoes now, I remember my mother and different events in my life—simple things like sneaking into her bedroom to look at the shoes, talking to her about why I only had one shoe, or helping her pack the shoes for all the moves that we made. Finally, my most recent memory is when I took them from New York to Maryland and realized that they are part of the last reminders of my parents’ home.