During the month of February, 2022, I did an illustration course given by Make Art That Sells called “Redrawing Black History.”  It entailed making four illustrations of influential African American women artists during iconic periods in U.S. history.  I had a hard time with these assignments since illustrations are not my forte. I usually work with my own themes.  What follows are my illustrations and links to the person represented. 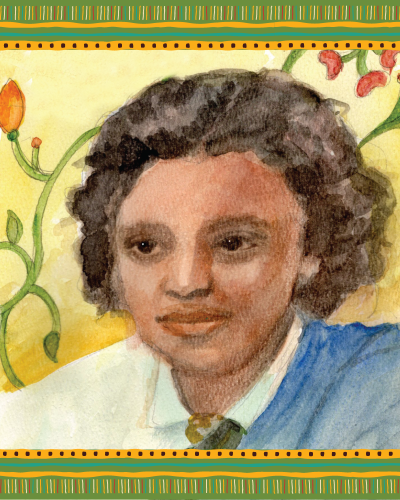 She was the first African-American and Native American sculptor to achieve national and then international prominence despite the racism of her time. I did my usual watercolor style with an Ojibway flower pattern as the background and an African motif and colors as a border. You can see more of her work at https://americanart.si.edu/blog/edmonia-lewis-stamp.  She just had a U.S. stamp created in her honor. 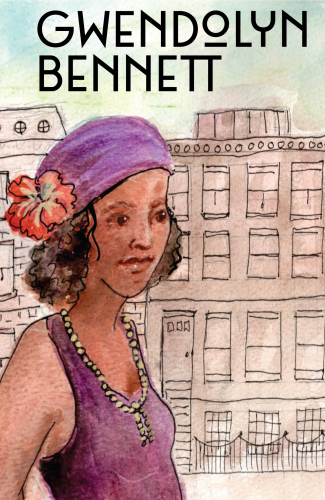 Ms. Bennett was an American artist, poet, writer, and journalist who chronicled the Harlem Renaissance during the Jazz Age. Having a seen what other artists were illustrating, I decided to place her in front of brownstone buildings and dress her like a “flapper” from the 1920s.  To learn more about her, click here. 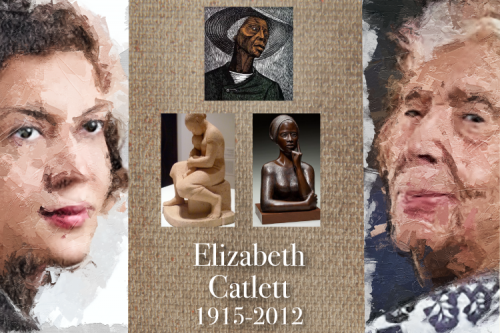 Elizabeth Catlett was an American artist and sculptor who worked in the 1950s and 1960s.  She moved to Mexico and her work reflects the struggles of African American and Mexican peoples. At this point in the class, I went from traditional media (watercolor and gouache) to digital techniques.  I wanted to show the range of her work and the time frame in which she worked. 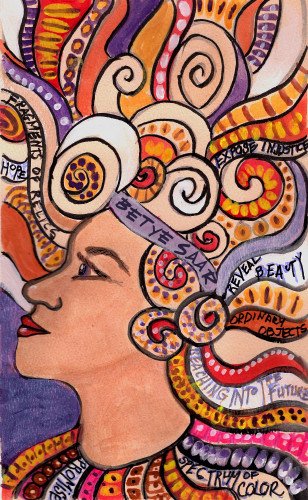 According to Wikipedia, “Betye Irene Saar is an African-American artist known for her work in the medium of assemblage. Saar is a visual storyteller and an accomplished printmaker. Saar was a part of the Black Arts Movement in the 1970s, which engaged myths and stereotypes about race and femininity.”  She is still actively working at age 95. My illustration of her was based on the famous Bob Dylan poster done by Milton Glaser. I added text from her poetry in a more psychedelic style.  Her work can be seen here. 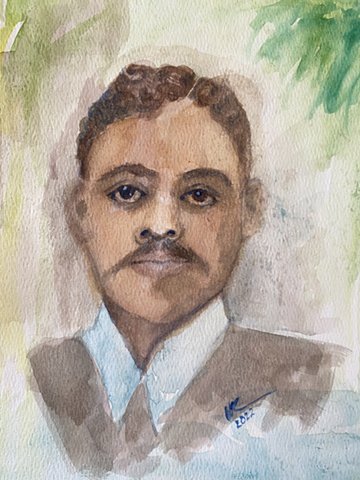 I was inspired to make a watercolor portrait of the Puerto Rican Arturo Shomburg, who was a historian, writer, collector, and activist. By the 1920s Schomburg had amassed a collection which consisted of artworks, manuscripts, rare books, slave narratives and other artifacts of Black history. This collection was purchased by the New York Public Library and became the basis for the Arthur Schomburg Center for Research in Black Culture.  He also was an advocate for Puerto Rican independence and acknowledged his Taino roots.  Even naming one of his sons after Guarionex, a Taino leader and warrior who fought the Spanish.

This assignment was a learning experience and I learned a lot on not only how to illustrator but gained valuable knowledge on the contributions of African Americans to the world.