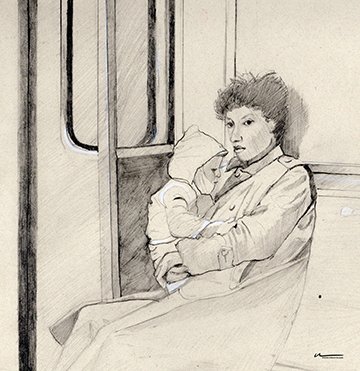 I’ve been reflecting on isolation and social distancing that we are all undergoing.  As an artist, I am very comfortable being on my own and naturally an introvert who doesn’t do much social interaction.  In looking over my work, I found this image I did while living in New York City of a young woman on the train. She inspired the following poem:

They groan and screech under the collected weight of skyscrapers and humanity.

Under the city streets, rivers of trains flow out to lives in the balance.

Stories of the day-early morning sleepiness or afterwork relief.

You flirt more in the afternoon.

Furtive glances between stations and advertisements for the beer you wish you had.

Relationships last maybe two local stops. If you are lucky the express makes the conversation last a little longer.

At 96th Street on the #6 at the faces changes all at once.

The blue suits and white blousons give way to sensible shoes and “what a bargain” coats.

The many blue eyes that avoided you and each other change to darker hues that stare with a knowing glance.

The beggar that does the 6:15 run is on today. His outfit doesn’t change, neither does his line.

Hey, isn’t that a new homeless women on her first run.

She comments at the far end of the car, “For these people, I don’t even exist, so why bother?”

Her moan adds to the groan of the train that no longer goes clickety-clack.

Mamí always travels before 9 a.m. believing that the pillos (thieves) are awake after that time and are looking for victims.

You avoid looking at the other passengers, but look anyway. Quietly hoping for no disturbance.

The sight of a young woman doing her rosary gives you hope.

Hey, that’s my stop. Bing Bong, the door opens and my train ride is over.