I have been doing some type of artwork ever since I could hold a pencil, crayon or whatever else could make mark on some type of surface.  Some of my favorite times have been in art school and doing assignments using very traditional tools and techniques.  In fact, I took a course on ancient art techniques and learned how to work on wood, board, and canvas. I learned how to make egg tempera paints using egg yolks and dry pigments just as they did before the advent of modern painting mediums such as oil and acrylic.

Up until 1984, I worked using these traditional techniques. Through my employment as a production artist, I learned about computers and how they were changing the art and graphic design worlds. There was a lot of potential in using computers for art and design, not only because of the ease of reproduction, as well as about how an image could be manipulated.  I first learned Adobe Illustrator. You have no idea of the joy I felt in not having to make a line using a ruling pen and messy inks! In 1994, I finally was able to learn Photoshop. Now I could manipulate my photos, make up something totally from scratch, or combine my drawings and paintings that were created traditionally with computer techniques. 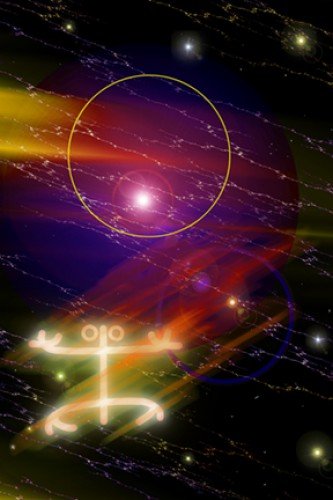 In 2002, one of my first all digital creations, Tainos in the universe, was accepted by the Ned Hatathli Museum’s exhibit, Stories from the Circle: Science and Native Wisdom. The museum is part of Diné College located in Tsaile, Arizona. I began to use digital techniques more and more. Sometimes just modifying paintings or drawings and sometimes just creating totally in the program. The Golden Turtle began as a goache painting on cardboard and used totally different colors. It became golden in Photoshop! 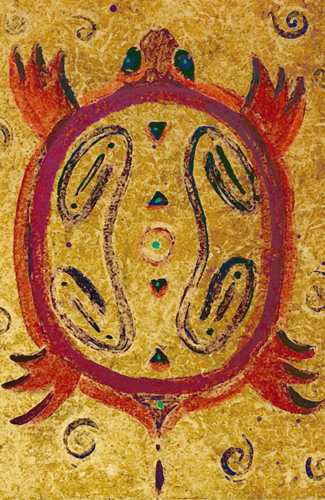 Lately I have been digitally enhancing/changing portraits.  Combining the image with elements that help you understand who that person is and what they represent. One of my favorites is of my grand-nephew, Jordon Reyes.  He now lives in Virginia, but was born in and lived many years in New York City.  Below is the original and my interpretation. I loved how it has a watercolor feel and yet was able to insert a NY scene in his sunglasses. 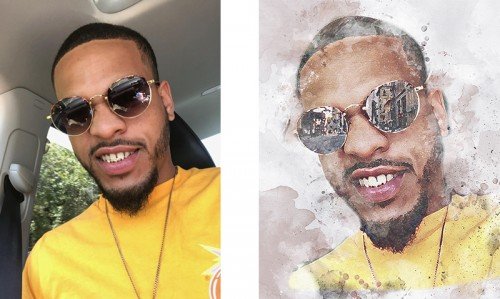 Original photo and the digital painting of “Jordon Reyes: A New York State of Mind”